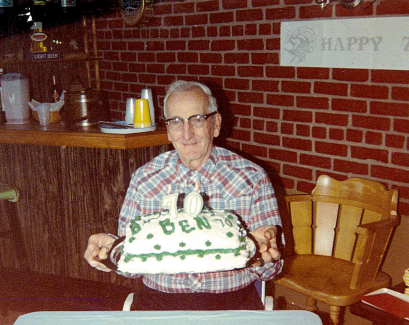 Fortunato “Ben” Scordo, 98 years young, passed away peacefully on July 4th at the home of his loving daughter Juli Hovey and under the care of Hospice of Jefferson County. Arrangements have been entrusted to North Country Cremation Service, Chaumont.

Ben was born in Watertown March 25, 1920 to Vincenzo and Marianna Agnesina Scordo. After graduating from Watertown High School in 1938, Ben proceeded to work at New York Air Brake. He then enlisted in the United States Army in October, 1943. Ben served in World War II as a combat engineer. During his time in the Army he fought in England and Germany. He was a squad leader and earned the European-African Middle Eastern Service Medal along with a Good Conduct Medal. Ben directed a squad of 12 men in constructing bridges and roadblocks, as well as demolishing enemy roadblocks while under enemy fire at the time of the Rhine Crossing. He also was a Rifleman Squad leader who defended bridges against enemy attacks. Ben was honorably discharged in September of 1945. After his discharge he returned to New York Airbrake where he built airplane and tank parts.

Ben married Virginia Pryor on August 8th, 1948 .Charles Aiesi was the best man and Mary Navarra was the maid of honor. Their wedding took place at St. Anthony’s Church in Watertown and was officiated by Reverend Julian P. O’Brien.

Ben and Virginia moved to Lowville, NY in 1954 where they operated an Atlantic Gas Station on State Street  until 1957 . When they moved back to Watertown in 1957 they operated an Arco Service Station on the corner of Mill and Main streets until his retirement in 1983. At this time he also served as a U-Haul and Hertz rental dealer. There wasn’t anything he couldn’t fix or repair. His favorite tool being Duct Tape.

Ben was an honorary lifetime member of the Italian American Club and served on the Board of Directors. He was also an avid bocce player, champion wrestler, and enjoyed hunting with his sons, grandsons, and friends in Canisteo, NY. Ben especially enjoyed goose and turkey hunting. He enjoyed traveling to the Caribbean with his wife, Woody and Midge Cook, Ruth and Tim Halmos, and Joe and Pat Castro.

There will be a funeral mass at St. Anthony’s church at 11: 00 A.M. on Monday July 9. As per Ben’s request there will be no calling hours.

To send flowers to the family or plant a tree in memory of Ben Scordo, please visit Tribute Store
Monday
9
July